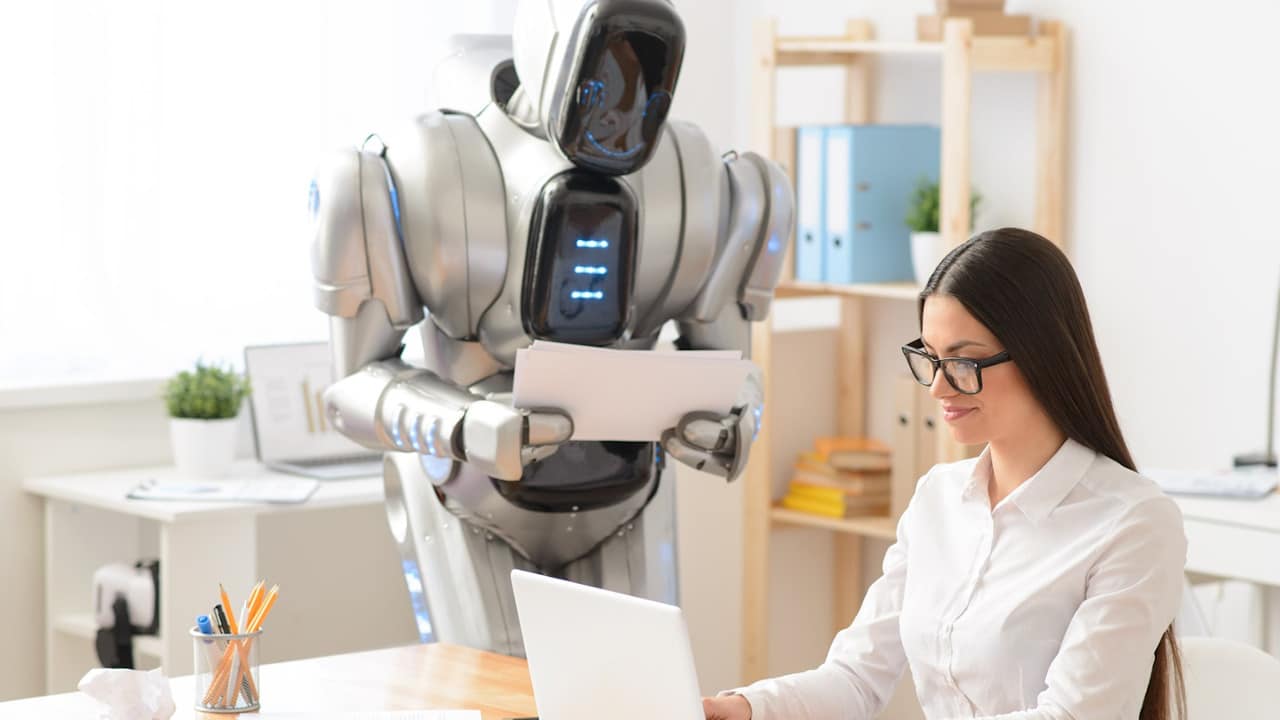 Robots are big business; from Google’s robotic cars, to Honda’s latest Asimo: over the last year it’s become increasingly clear that we’re looking towards a tsunami of automation in the workplace.

There’s lots of debate about whether this will be a good, or bad thing for people (probably good in the long run – nobody wants to go back to handpicking cotton for a living, we may think the same way about data entry and telemarketing in the future; bad for some folks who find themselves underemployed or unemployed in the near future).

If you’re thinking about your career, then robotification of your job is something to consider.

Bill Gates drove this story home at a talk for the American Enterprise Institute in March this year. “You know; we have to adjust,” said Gates “these things are coming fast. Twenty years from now, labour demand for lots of skill sets will be substantially lower, and I don’t think people have that in their mental model.”

Gates probably has a point about few of us really considering the robotification of our jobs; how many of us when considering a career think about how quickly a robot can do the same job? However, you should; because they soon will. But how do we know which jobs will be taken by which robots?

The robotification of the UK workplace

Most of the concern about robotification stems from this Oxford Martin School report: The Future of Employment. This report hit the headlines with a chart that showed 47 percent of total US employment in a high-risk category (meaning that jobs in that category are automatable over the next “decade or two”.)

Its authors: Carl Benedikt Frey and Michael A. Osborne, analysed 702 careers and broke down the tasks required to do that job: social perceptiveness, finger dexterity, persuasion and negotiation, and others. They then tracked those skills against the predicted time plan for robotification of each task. The report suggested that lot of jobs would disappear faster, much faster than anybody people thought. 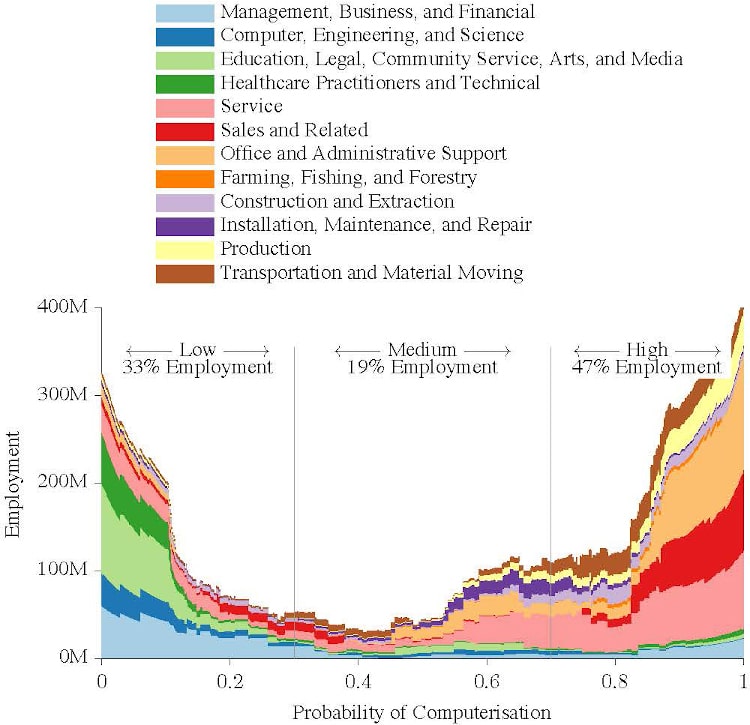 It’s not a timeline. The chart shows the probability of each job currently being performed today, being automated at some point in the future. If you’re not familiar with statistical analysis, this chart’s hard to interpret, so we’ll explain.

The X-axis (horizontal) represents all the amount of chance of each role being automated in the future, from 0 on the left (no chance of automation) to 1 on the right (total chance of automation). The Y-axis (vertical) shows the number of people currently employed in that kind of job, in each industry.

The authors divided the chart into three sections: Low (30 % chance of being automated), Medium (70 per cent) and High (100 per cent). As you can see, there’s a big divide with almost half of all jobs in the High area on the right (this is where you do not want to be).

Look at the large pale green area on the left: Education, Legal, Community Service, Arts and Media. Lots of jobs in this industry are safe, because there is a lot of green on the left, and only a small amount of green on the right. This is a good industry to work in. The pale orange and brown areas on the right are bad: Office and Administrative Support and Transportation and Material Moving all have large amounts of jobs in the High risk category, and few in the Low risk category. You do not want to be in the business of placing and shipping orders for products, for example.

Education; Healthcare; Computer, Engineering and Science are all good areas to be in; Sales, Service, Transportation; Production are all pretty bad.

If it helps: imagine an army of robots munching from the right to the left of Frey and Osborne’s chart; eating all our jobs as they go.So when it comes to talking to your careers advisor you might want to think about whether a smart robot could do your job.

When will robots take our jobs in the UK?

How much of this will impact the UK? Although Frey and Osborne’s data covers the US job market, it’s much the same story over here. While the US is proportionally much larger than the UK, according to this International Labor Comparison by The Bureau of Labor Statistics the percentage of people working in the Service, Industry and Agriculture areas are roughly the same in both the US and UK.

The 10 jobs safest from robotification

The Oxford report suggests that the safest jobs require creativity and social intelligence. Jobs in the fine arts, those that require negotiation skills, and jobs that require you to assist and care for others are all safe space. “Generalist occupations requiring knowledge of human heuristics, and specialist occupations involving the development of novel ideas and artifacts, are the least susceptible to computerisation.” say Frey and Osborne.

Out of the 702 jobs Frey and Osborne analysed, these are the 10 most safe positions:

Other safe jobs include nutritionist, surgeon, psychologist, dentists, primary school teacher, and human resource manager. As a general rule jobs that involve a high level of creativity and negotiation with other human beings are going to be okay. You can view the whole list of jobs, from safest to most at risk at the end of this document (The Future of Employment PDF).

The 10 jobs at the most risk from robotification

The jobs most at risk are in the first wave of computerisation, which is starting already (Google’s self driving car may be getting the headlines; but the driverless tractor is going on sale this year).

In the at-risk category you find workers in transportation and logistics occupations, together with the bulk of office and administrative support workers, and labour in production occupations, are likely to be substituted by computer capital. These are the folks that are most likely to lose their jobs to computers, or robotic devices, in the near future.

These are the top 10 worst jobs to be in for robotification:

Why are robots taking the jobs?

There are two different technologies that are coming along in leaps and bounds:

Both of these areas have become a huge focus for educational and military investment in recent years, and it’s becoming increasingly clear that smart, mobile robots are going to be increasingly commonplace in the world as we move forward.

You don’t have to look far to see the advances in mobile robotics. Honda demonstrated the latest version of its Asimo (Advanced Step in Innovative Mobility) robot in April, and the latest version features enhanced hand dexterity, including the ability to sign in both Japanese and American sign language, as well as the ability to run faster than previously, climb stairs more smoothly, hop, jump, balance on one foot, and transition seamlessly between walking and running, among other new and unique capabilities. A recent football demonstration with President Obama, no less, has aptly demonstrated just how advanced Asimo has become. 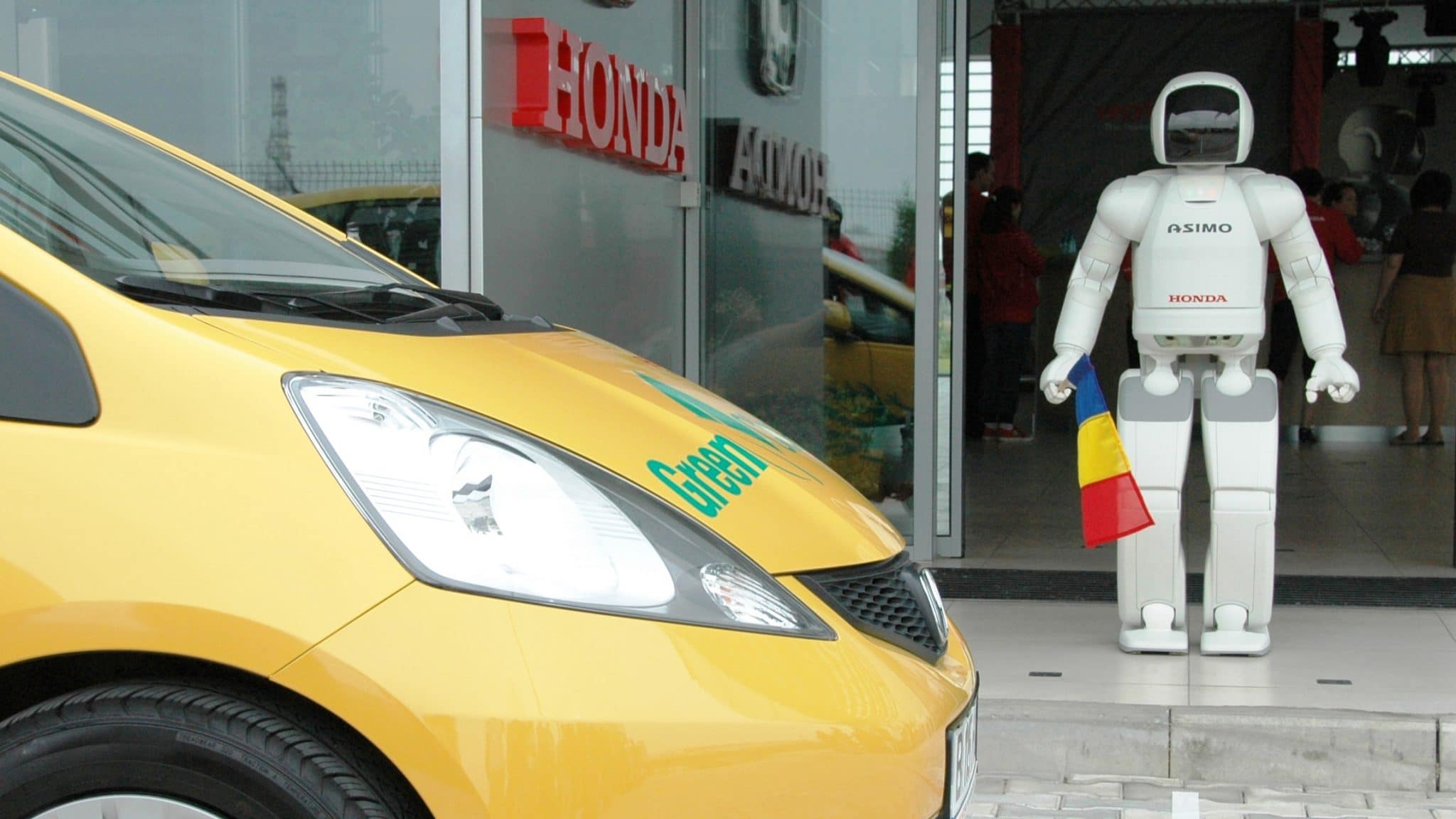 Honda seems serious about developing a robot for everyday life. We “created ASIMO to help people and society” says Honda, “to create a helpmate for humans requiring assistance with their daily lives.

It’s astonishing how quickly computers are becoming adept at replicating human perception. There are few examples of machine learning on earth as strident as Google’s famous self-driving car. Back in 2004 Princeton researchers said that “executing a left turn against oncoming traffic involves so many factors that it is hard to imagine discovering the set of rules that can replicate a driver’s behaviour”; six years later Google had nailed the autonomous car. 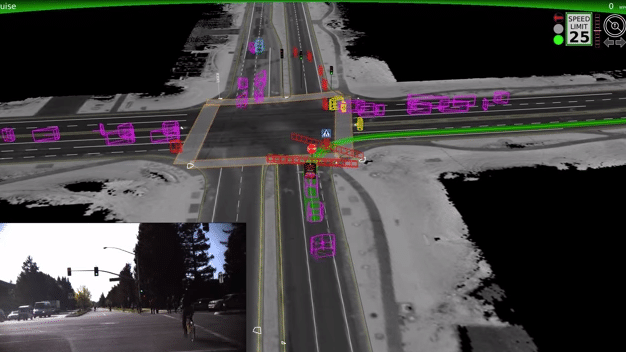 Last week, Google showed off a car that can track hundreds of different objects in a small area. It’s now ridiculously polite to pedestrians and cyclists, as it moves towards being made safe for cities with Florida, Nevada and California allowing licenses.

According to the Google blog the latest edition “can detect hundreds of distinct objects simultaneously – pedestrians, buses, a stop sign held up by a crossing guard, or a cyclist making gestures that indicate a possible turn. A self-driving vehicle can pay attention to all of these things in a way that a human physically can’t – and it never gets tired or distracted.” A video demonstration by Google’s latest car can even detect the hand signals from cyclists and react accordingly.

While it’s tempting to think of Google’s car as an expensive toy from a rich company, the self-driving car will mark a serious first wave of workplace robotification. It’s not really about cars; but trucks and buses. If Google can bring the self-driving car to market it could revolutionise industrial transportation. On average, it costs £19,000 per year to hire a bus driver in the UK; and £23,000 a year to hire a truck driver. Most buses and trucks are designed to run for 12 years; even if Google’s self-driving car costs £100,000 it’ll have buyers ready in the haulage and public transportation market. Here in the London, TFL has shown that there are large scale industries ready to invest heavily to automate their services.

That sort of math can be applied to most jobs. So when you put Google’s brain inside Honda’s robot you have a worker drone that doesn’t need work breaks; toilets, holidays; it’ll never get sick, go on strike or look for another job. It’ll also never get paid or buy anything, which is going to make society interesting for a while. But no matter what we end up doing in life; that robot is going to end up doing an awful lot of jobs. It’s a good idea to go through Frey and Osborne’s, The Future of Employment: How Susceptible are Jobs to Computerisation? 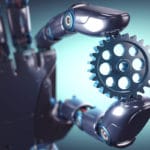 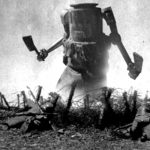 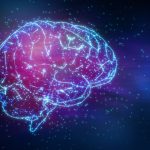 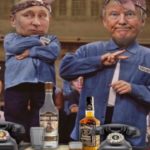 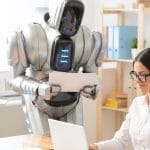