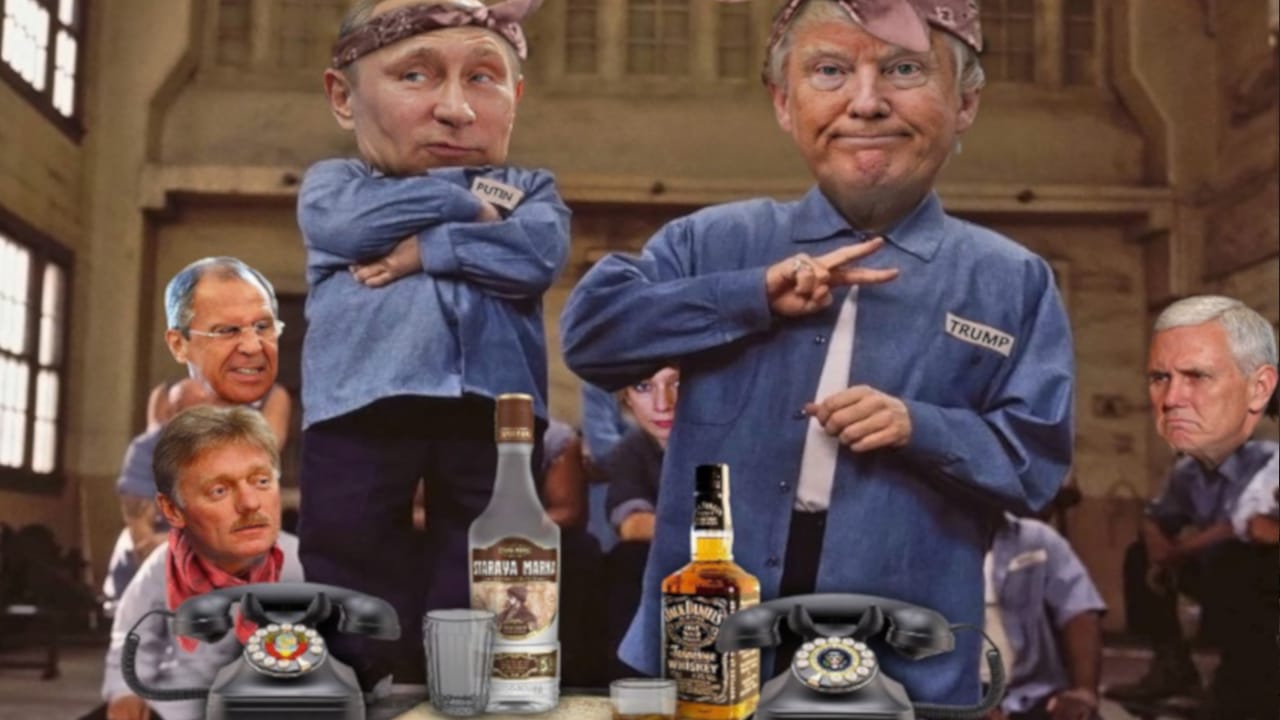 Broadly speaking, Trump has two categories of support on Twitter. Trolls, and Russian bot accounts pretending to be patriotic Americans.*

In many cases, these two groups cross over. The trolls contains actual humans, such as @prisonplanet, and many, many bots.

In this article I shall however examine the way in which Russian bots are created and used to follow and boost Trump online.

It is not that Donald Trump does not have widespread support. He does; even at his current polling lows, his support includes millions of Americans. It is, rather, that Trump’s supporters are incredibly unlikely to use Twitter.

After the first debate, which all scientific polls and focus groups showed that Donald Trump lost resoundingly, the hashtag #TrumpWon started on Twitter. It was pushed entirely by bots. The BBC confirmed the bot advantage yesterday: 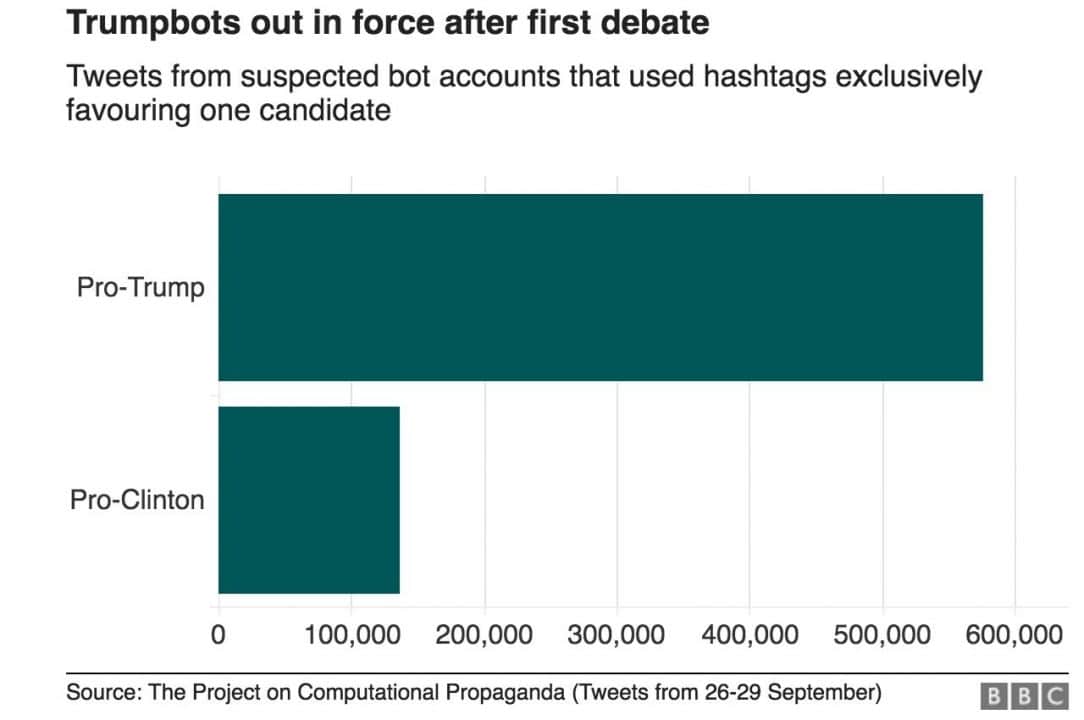 However, my own interest was in seeing how the Trump campaign worked with the alt-right and the bot accounts generated in Russia.

When #TrumpWon trended on Twitter after the first debate, it was obviously faked to the seasoned observer. I retweeted an interesting image posted by a user called Dustin Giebel who tracked the bots to St. Petersburg where there is a troll farm: 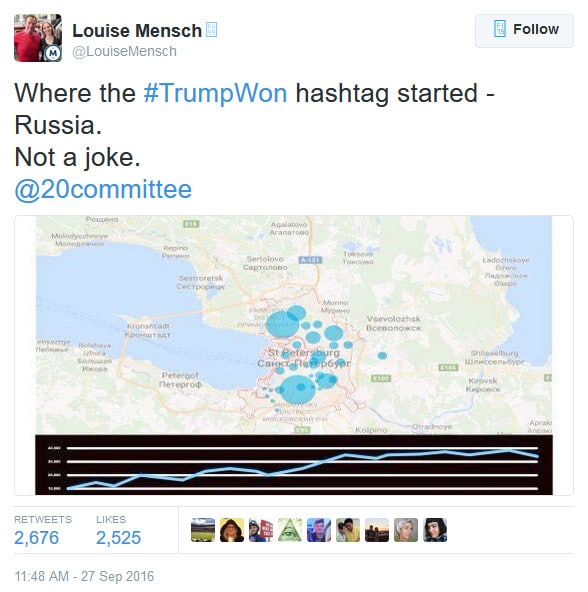 This tweet was RTed 3,500 times. Giebel was a pro-Hillary supporter relatively new to Twitter and as I read his feed, before my own tweet went viral, he was using a tool called TrendsMap. I duly logged on to Trendsmap to see the locator for myself. It was obvious right away that Giebel’s image wasn’t from their tool, as it does not display with maps and circles, but instead uses small square markers – I never thought the map was created using the tool, but rather that the data had been. (As I compose this article, Giebel has confirmed my initial surmise, that he plugged in the trendsmap data to a personal plug-in for Google maps that he built himself; as he said ‘I still think I’m right’ – me too). Trendsmap denied that its tracker showed the trend starting in Russia, and that was sufficient for Washington Post to write a completely wrong “debunker” piece asserting that it had not started in Russia, in which Chris Cilliza merely reprinted their press release.

Such a challenge inspired me to look at the contradictory data. Firstly, Trendsmap appears to use IP locators to locate tweet accounts. If the account is using a VPN, it may very well show that it was created someplace other than Russia. So Trendsmap, in asserting that the trend did not start in Russia, was only ever talking about the IP address of the tweeter. It was not, and could not, deny that Russian bot accounts were pushing the trend as it only tracks IP.

So whether or not #TrumpWon started in Russia could not be determined merely by crossing Trendsmap locators and the hashtag. The behavior of a Twitter account is another factor in determining if it is a Russian-controlled bot.

Below, I will discuss several accounts, found on Trendsmap, which are Russian bot accounts but which Trendsmap locates elsewhere, eg in the UK – that’s VPN for you.

Definition of a Bot

There are two types of bot. Firstly, there are the purely automated accounts. These and only these are the types of bot referred to in the BBC study (which, again, did not track the most popular hashtag, #TrumpWon).

The second type of “Bot” is a human being who is working for the Russian government in a troll farm in St. Petersburg, pretending to be somebody he isn’t – like an American mother in Florida (@StaceyBrewer18, temporarily known as “Mom For Trump” on twitter).

I used Trendsmap for my researches. First, I searched the tool for the “trending topic” @DanScavino.

Next, I found a bunch of Trump favoring egg accounts that displayed themselves RTing the @DanScavino account – Trendsmap allows you to see this in real time.

When you click on the profile of the newly created bot account, however, its retweet of Scavino immediately disappears.

Three such bots that I videoed in the act of using this method were @Commander6080, @Sbragusa, and @jamesdgriffin. All have profiles that pretend to be Americans and to live in the USA.

How might this affect a twitter trend? What is the point of it? One scientist theorized as follows. It is a “fake trend” theory called “A Handoff”:

Let’s say you had a hashtag you wanted to get trending. You have a thousand bots (or Russian Trolls) and a popular account like Ricky Vaughn. You have the bots start using the hashtag, they start flooding twitter until it gets a high count (but not in the top 20 trends) then have a real person, Ricky Vaughn, start pitching the hashtag to his followers. Here is where the window of timing kicks in: within minutes, Ricky Vaughn can have something trending, but before he gets the hashtag to the top 15 you have almost all of the bots automatically delete their tweets with the hashtags. You‘ve now started “a trend” quickly and have had it associated with “Ricky Vaughn” and not a 1,000 odd bots or Russian trolls.

Here is a video of @Commander6030 using the method:

Here is “Susan Ragusa” using it:

… and here is “James D Griffin” from “New Jersey, USA” using it.

As I got closer on my researches to pinpointing the way that various bots work with the trigger accounts, @PrisonPlanet, one of the most actively involved accounts, a human being and verified account working for infowars, blocked me on Twitter after literal months of interacting with me. The name of this man is Paul Joseph Watson. He denies any knowledge of how the Russian troll farms use his account, which must mean he never looks at who is re-tweeting him.

Watson is RTed by thousands of pure eggs. Take the last account to retweet Watson openly, and you will find it is a Russian bot:

I tested this theory today, and it still held up. In the links are photographs of Watson’s retweeters demonstrating how an egg account with a fake profile sits at the top of his RTs.

Again, it is important to distinguish between the two types of ‘bot’. Pure robots, and robots with human curation. These are trained human beings and they work in many languages. They start from a troll farm in St. Petersburg, Russia, reported on in the New York times. But only if they are sloppy will the VPN still locate them outside of America. 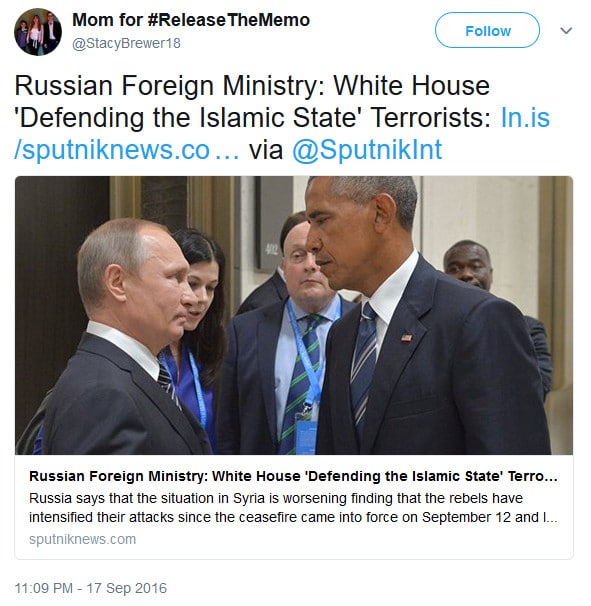 Although this is supposed to be a military wife, he boosts Russia’s military at America’s expense:

(the link to the embedded video says ‘Here’s something you never saw or heard about in the West.’)

Update: I find the identical tweet and link in a “British” Putinbot whose handler I have become fond of, @AfredAlbion:

and even follows the Russian ambassador to the UN:

The interesting thing about analyzing Mom For Trump is his use of most of the tropes pushed by Breitbart’s Steven Bannon, now a Trump advisor. These are:

Many of the “EU located” Putinbots will also hawk the Russian puppet Viktor Orban, the PM of Hungary. Here’s a Spanish-language Putinbot who has chucked in an avatar boosting Assad for good measure (his account reads “the tiger of damascus”).

“American” bot accounts curated by humans display an unhealthy interest in Nigel Farage who was denied a place in the official leave campaign.

The Putinbot Link Between Brexit And Trump

I first noticed the Russian bots during my work online to support Brexit. This is because English bot accounts, that is, Russians who locate their VPN in the UK in order to pretend to be British, were pushing Brexit. As a passionate supporter of Brexit for valid, progressive reasons, I did not want to risk the result of the referendum by drawing attention to Putin’s love of Brexit – it might have endangered the result. It is a great satisfaction to watch Boris Johnson draw up sanctions on Russia now.

Human curated bots will always favor both Brexit, and Trump. Here is an English-based Putinbot, Gilli 5. He is pretending to be a woman located in London, but he has an intense interest in Trump.

He also of course backs Brexit:

Sadly, as most Britons reading this will know, Donald Trump is utterly despised in the UK. “Gilli5” forgot that he was not meant to show he was really tweeting from Russia and is a Russian:

Gilli is also working with Scavino and Prison Planet.

But let’s look at “American based” Putinbots with their intense, Steve Bannon approved interest in the nobody, Nigel Farage:

(I’m slightly losing the will to live here, but I plough on).

Finally: Accounts The Russian Troll Bots Have in Common

These are the accounts that you will always find interacting with the Russian bots. Before he was banned by Twitter, Ricky Vaughan. And Micro, who gets banned and reincarnates with a new number at the end of his name: the latest is @WDFx2EU7 (surely it should not be beyond the wit of Twitter engineers to block the avi photo and any combo of the letters and Micro).

Next, @JaredWyand. You will find tweets by him in the feed of all the putinbots. And after him, “Linda Suhler PHD” whom I assume is himself a bot, but certainly appears in the feeds of all of them. Here is a tweet where “Linda” is tagging in the multi-banned @[email protected]

Coda: Finding A Common Message Pushed Out by Both Types of Putinbot

One easy way to spot a Russian troll, whether curated or automated, is to look for them pushing out the identical message. Do we remember that “Putin: How Obama Created ISIS” video?

My friend @AfredAlbion (go easy on him CIA, I think we can turn him) tweeted that video out in 2014. “Mom For Trump” tweeted it out this year. What if we run the search through Twitter?

but wait! There’s more! By using this method we can see how the Russian troll farm places its fictional accounts around the world and in multiple languages. Australia, Germany, Japan, Africa…

Below, Linda Suhler PhD [sic] and Jared Wyand. I hope you enjoyed the tour of the trolls with us today. As I like to tell my Putinbots, “Better Luck Next Bot”!