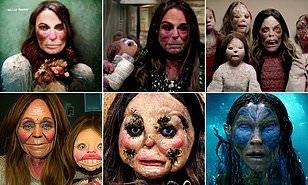 An artificial intelligence (AI) art generator has been found to produce images of a haunting woman with sunken cheeks in gory settings in response to multiple prompts.

Twitter user @supercomposite shared a series of images of the creepy figure, dubbed 'Loab', which they had created using AI tools since April.

'The AI reproduced her more easily than most celebrities,' wrote Supercomposite.

'Her presence is persistent, and she haunts every image she touches'.